Apparently it is Twitter Week here at Good Old Rock (look for the Twitter Clients for BlackBerry shoot-out tomorrow in the Tech Tips). Today I’ll be focusing on websites that can add value to your twitterific experience. I will be the first to admit that this post was somewhat inspired by a similar post yesterday at Blazing Minds, but I don’t think she’ll be too upset. But now…on with the links!

Friend or Follow – We get things started with a simple way to determine how much of your Twitter love is of the unrequited variety. Friend or Follow quickly lists all of the folks that you follow that don’t return the favor. When I ran it for myself, it returned 48 people. Now, I’m not surprised that @algore and @tomwaits aren’t following me, but I’m a little surprised at  @Dr_Feelgood and @sls_redbean.

Celebrity Tweets – If you don’t want to have to follow people like @hodgman (John Hodgman) , @moonfrye (Soleil Moon Frye), or @aplusk (Ashton Kutcher), but want to keep up on their tweets, cruise over to Celebrity Tweets. They aggregate tweets from quite a few famous-type folks (of various levels of celebrity). On a related note, please accept my apologies, John Hodgman, for putting you in the same sentence as Ashton Kutcher and Soleil Moon Frye.

Twitter Grader – If you’re all about the numbers and lording your rank over your peon friends, perhaps it’s time to back that up with some solid stats? Twitter Grader to the rescue! Plug in your twitter username (or anyone else’s, for that matter), and the system will analyze you based upon number of follows, tweets, replies, how many times @wilw has mentioned you, etc, and spit out a “grade”. I personally have a grade of “93”, which means I get random replies to my tweets about unicorns, but it’ll be a cold day in hell before I get a RT from @feliciaday.

Mr. Tweet – Speaking of numbers – if you want to crunch more statistics, Mr. Tweet can hook you right up. For example, according to my report, I am an “enthusiastic twitterer” and am “engaging”. I am not sure how useful that information is, but some people just like to be evaluated. Mr. Tweet also can recommend new people for you to follow based upon some mysterious algorithm (although I don’t remember exactly WHERE it provides those recommendations, but I know it totally did, because I followed some people due to it).

TwitterCounter – This is the last “stats” webpage in the list. If you like fancy graphs that represent how many people are following you, well, there’s really only one place to turn – TwitterCounter. It also lets you map up to three different Twitter users for comparison – for example, here’s a fancy graph that shows the follower trending of myself, @ryanswift, and @rikomatic: 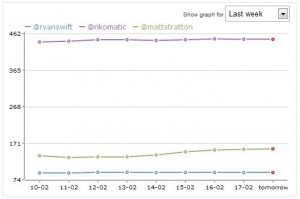 #hashtags – Those “in the know” in the Twitterverse make frequent use of “hashtags” – that is the practice of appending the pound sign to the beginning of a “tag” to clump related tweets together. For example, one might use the hashtag “#unicornconspiracy” at the end of any tweet related to the vast coverup of American deaths due to being impaled by a horn. This site provides up-to-the-minute trending and consolidation of the popular hashtags floating through Twitter at any given time.

Have a favorite Twitter-related site that I missed? Post it in the comments!