Confessions of a Technology Girl

_It’s Guest Post Week on Good Old Rock. Today’s post comes to us from Tiffany of Confessions of a Chicago Girl._

Since Matt is so awesome and did an awesome guest post for me, I was completely excited when he told me he had one.spot.left. and could I guest post? That’s like asking Angelina if she wants to adopt one more kid or The Gosselins/Speidi if they want one more magazine cover. Obviously yes.

So. I’m sitting down to write this with some Psych Youtube moments playing in the back, twitter open, and doing some gchat and I’m thinking, technology? Pretty awesome right? Right. So here I am, supposed to write a whole actual post about it and I’m still like wtf am I going to write about. I’m also typing with 3 fingers because I never paid attention in typing class and learned to type in late night AOL privatechatrooms with my bestie and whoever the boys of the moment were.

I pretty much love technology. I mean I remember having a computer when I was like 6 and the game we had asked questions like “who’s buried in grant’s tomb” and “the rain in spain lies _____ ” and you had to answer questions that seemed pretty daunting to me. There was also some bunny trying to get the carrot game. I remember the screen was green. I remember having computer class in 2nd grade and we had number crunchers and the oregon trail and where in the world is carmen san diego and my fav, mind castle. Where else would a kid learn about spelunking as a hobby or what dysentery is? I don’t know about you but I can totally shoot a buffalo now. 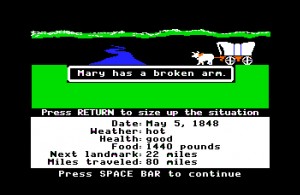 I still remember when we got the internet and used dial up and I left it on all night and we had a huge phone bill and the parents were pissed. Then eventually we got AOL and I realize now I was totally this close away to being a law and order svu pedo story with some dude with the screenname BigJoshL [how creepy I remember that] being a perv and I was like “chest size? whats that? and being like aol sucks.

A few years later of course I was into it. So into it. The AOL, not the pedos. AOL profiles with html in them were badass. I had to wait for my brother to sign off so I could sign on cause 2 screennames couldn’t be on at once. Bogus. i remember the first sn I made which was supposed to be TigerLilly but ended up Tigetlilly. Lame. I was xblinkgirlx forever, don’t be jealous. [Gchat is clearly the new instant messaging] AOL profiles also were good for relationship updates. Seeing this girl that had a crush on my bf have her status say “turn on the fuuuuuuuuunnnnnn” and my bf being a best buy employee, I was all hell no and had to send a bitchy IM cause that’s how I roll.

Besides AOL chats, there was the webcam. It’s a good thing I never plan to run for political office or marry a politician cause being 16 with a webcam ruined me. My high school bf and I got all kinds of naughty on that thing. Add that to be an actual catholic school girl and there are some pics out there that make me blush just thinking about them. Mix in being a member of thelivejournal naked parts community and throw in some pictures after digital cameras came out and you have the idea of what kind of high school girl I was. When CD burning came along and I was away at college, well, the bf got some pretty awesome cds sent to him with lots of porn so he would have fun with himself and not another girl. [didn’t work out so well but i tried]

Now of course technology for me is all about my iphone. I know that I don’t use it the way i’m supposed to but I don’t care. My fav apps are the celebgossip one, blocked, and twitterific [although after seeing Marcelo’s guest post for matt i might try twitterfon]. I also like checking the weather. Oh oh! I love the probasketball one. I am a huge Bulls fan and they twitter for free tickets and using that app I answered a question about how many rebounds Joakim Noah had in the last game and won a pair of 10th row tickets ($145 each baby). So clearly that alone made the iphone worth it for me. I also love the app for Chase bank, the scientific calc apps [thank you iphone for not making me get a ti-83 or 86 or whatever number is out now]. I use apps for jewish holidays and and call a cab and I am obsessed with Shazam. In case you were wondering, my ring tone is either the office or the theme to true blood [i want to do bad things to you] It’s hot.

Technology is all crazy and advanced with it’s touch screens and iphones and mtv specials on people who are obsessed with the online world [did anyone see the one where the girl was a star in half life and couldnt sing in front people in real life. good lord.] Technology helps pets with the Microchips for pet identification. Making sure that even if a collar gets lost or a pet runs away, to know they can be scanned and found is amazing.

Technology brings people together or breaks them up, Postsecret, Fmylife, Awkward Family photos, Cute Overload. Where would we be without these gems? Nowhere fun thats for sure. Although googling people and finding what anyones up to via facebook stalking is pretty awesome too. Not that I would ever do that….not me…