One Number to Rule Them All…Google Voice!

When I was a kid, it was easy to remember phone numbers. For one thing, we didn’t care about area codes. But also, everyone had one phone number – and it didn’t change. My parents’ home number is the same one that I grew up with – even when we moved across the street, our number didn’t change. Heck, little Tommy Keller moved practically across town and his number was still the same.

These days, it’s a lot more complicated. Everyone has mobile numbers, work numbers, and some people even still have home numbers. Granted, with the current state of number portability, at least your number will stay consistent if you switch mobile carriers – but that’s still just one number out of several that we all have. It’s not unheard of for a person to have at least four different phone numbers – desk phone, work cell phone, personal cell phone, and home phone. That’s a lot of numbers to remember! Plus, it’s a lot of phones to have to try to call.

For example, if I want to get my wife on the phone, I will generally call her at her desk. Hmm. No answer. Hey, it’s lunchtime! Let me try calling her cell. Nope, voice mail there too. Oh wait! That’s right! She was going back to the house for lunch today. Call the house, and voila – wife on the phone. That’s way too complicated.

Google Voice began life as a service called Grand Central. The principle is simple enough – as a Google Voice user, you have one single phone number which you give out to people – but it is available from all of your phones. Sound complicated? It’s really not. Here’s how it works: when someone dials my Google Voice number, some or all of my phones ring (more on that later). I answer whichever phone I want to use. I hear a recording telling me that I have a call from

It’s a pretty slick implementation. I can even transfer the call from one phone to another. For example, if I’m chatting with you on my desk phone at work, but then realize it’s time to go home, if I just punch the star key, it will ring my other phones…allowing me to “move” the call to my cell. I can set up caller groups so that calls from certain people ring certain phones. And I can set specific phones to only ring during certain times. Here’s how I have my work desk phone set up: 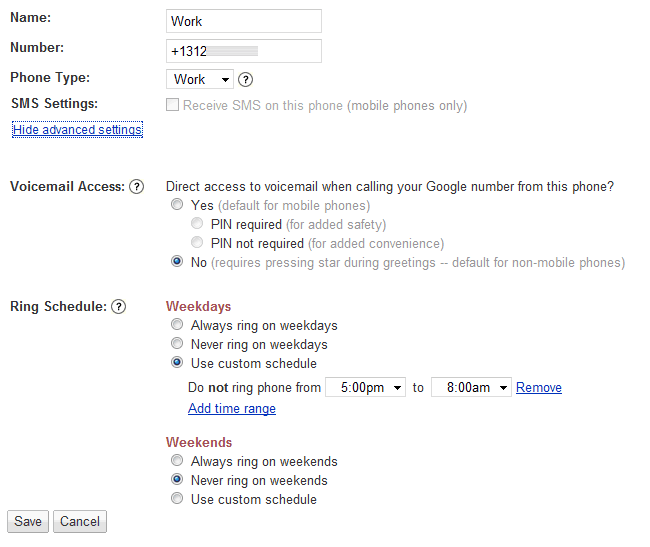 Notice that my work phone only rings during the work day

Google Voice integrates with your Gmail contacts, so if someone calls me who is in my Contacts, instead of Google Voice prompting them to say their name when they call, they get punched straight though and the GV recording tells me their name when I pick up a phone. Additionally, if the person is in my Contacts, in the voicemail history on the GV website it will display the caller’s name, instead of their phone number, as it does for my mother below:

Notice anything neat about that voice mail? Yes, that’s right – in addition to being able to listen to it online (I could also dial in from my phone), Google has attempted to transcribe it (I also get an email with the transcription, although you could also have a text message sent instead). Of course, the transcription is not always accurate, but it is kind of fun. My mom gets a kick out of seeing what Google thinks she said.

There are a bunch of other great features of the G-Voice system – as mentioned before, you can set up caller groups and you can even have different greetings for different groups. I don’t actually do that. Google Voice also supports text messaging, so you can have people text you at your GV number and have those texts either sent to you as emails, or texted to other cell phones. I did discover the other day that while my GV number can *receive* text messages from international numbers…I cannot actually send to them.

Making calls from your Google Voice number is where it gets tricky. There are a few ways to do it, and none of them are really super great. One way is from the web interface; you log onto Google Voice and place the call from the web – telling it which of your phones you want to call from. It them calls YOU on YOUR phone, and when you pick up, connects you to the number you wanted to call. This is really a roundabout way to do things, although useful when doing a callback from a voice mail on the website.

Another method is by calling your own Google Voice number from one of your phones, and then walking through a menu to dial the number. Also not very easy, but if you put the speedial and pause commands into your phone, you can automate it somehow.

The best method would be to use an app on a smartphone to handle all the dialing for you. Google recently released official apps for both the BlackBerry and for Android to handle this. There is no “official” iPhone app yet, but there’s a decent one in the app store (it’s not free, but I don’t think it’s very expensive either).

To make a call using the BlackBerry app, you navigate to the person you want to call in your address book, and then using the context menu, choose “Call With Google Voice”, as you can see here: 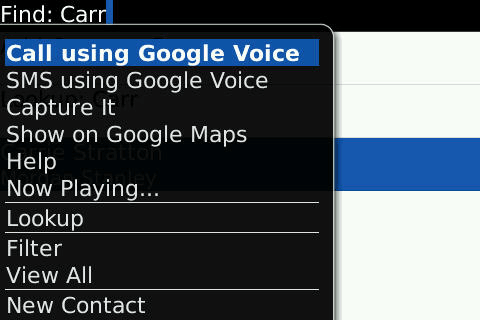 You can also manage your voicemails and text messages from the app. Again, it’s not ideal – the previous app I used on my BlackBerry, GVDialer, worked in an “intercept” manner, where all outbound calls from my BlackBerry were intercepted by the app and then redialed using Google Voice. I haven’t decided which I prefer.

At this time, Google Voice is invite-only, and no, current Google Voice users don’t have invites they can give out – you have to sign up for one and hope Google picks you. I’ve personally been using the service for about two years (I was a Grand Central user before the Google acquisition) and while I haven’t gotten a full adoption from my friends and colleagues yet (my wife, especially, refuses to call me on my Google Voice number), over time more and more people are using that number to call me.

What do you think? Have you tried Google Voice yet? Are you eagerly waiting for an invite? Do you think the whole thing is for the birds? Let me know in the comments!