Twitter is something that has become a part of my daily life. When I’m on my computer(s), I use TweetDeck to keep up with all of the folks that I follow, and it’s really a robust solution. However, a good portion of my time is spent away from a computer, so I am reliant upon my BlackBerry for all internet-type things.

Previously, I posted my BlackBerry Twitter Client Shoot-Out, in which I reviewed four of the main Twitter apps for the BlackBerry. As a result of that evaluation, I determined that TinyTwitter was the clear champion in this space. However, since then, a new piece of software has been released, and despite a few oddities and minor issues, it has now become my go-to app for Twittering on my BB.

What is this magical software, you ask?

The main appeal of ÜberTwitter (hereafter referred to as “UT”), to me, is how slick and seamless it is. It’s a piece of software where the designers clearly thought through the usability. It follows the BlackBerry keyboard shortcut conventions (“T” for “top”, “B” for bottom, etc), and it does not “steal focus” on updates. Integration is clear and it’s very easy to figure out how to do just about anything you need to do.

The basis of any Twitter app is going to be displaying the feed of your follows. Here’s what the UT timeline looks like: 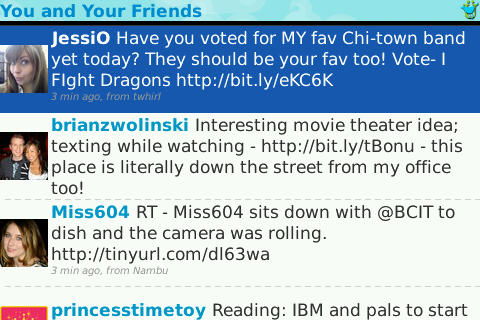 The ÜberTwitter timeline is clean and easy to read

Pretty basic stuff…you see your friends, and their avatar next to their updates. Scrolling up and down with the trackball takes you through the timeline. Clicking on a single update returns this screen: 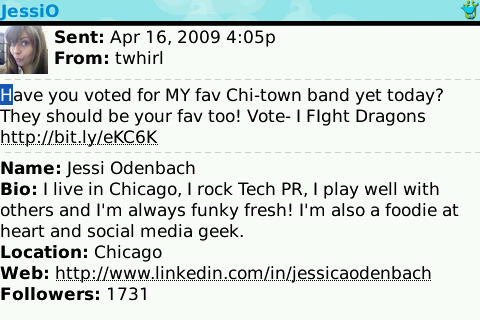 This is where UT really shines – in addition to the text of the tweet, it displays, inline, the bio of the user, as well as the post time and application. This screen is a little funky, however…I’ve had issues where I cannot select all portions of the text (which can be annoying if there are several @usernames in the tweet that I might want to click on)

Some other useful functions of UT can be accessed via the Menu: 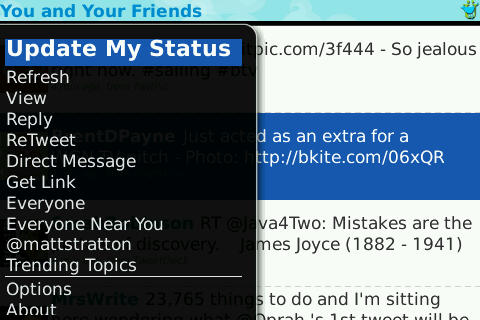 As you can see, from this menu you can update your status (send a tweet), post an @reply, retweet a post, or send a direct message. You can also load the links in a tweet.The @username menu displays all tweets that include your username. Posts that begin with your username are highlighted in yellow (for some reason, CaptureIt is having a hard time getting me a screenshot of this).

Another nifty feature is “trending topics” – by clicking on this, UT will display a link of popular hashtags and topics, which can be interesting. UT also has location functionality, although it does not integrate with the GPS, and can only pull your location information from cell tower triangulation. You can also have UT update your Google Talk status with every tweet…if you’re into that kind of thing.

Like all apps, UT is not without its issues. You can only attach a photo to a tweet that you take within UT – there’s no way to attach a photo already on your BlackBerry. And it definitely uses its fair share of battery time (and there’s no way to set it for “manual updating only”). However, all of these issues have been confirmed by the UT developers, so I believe we’ll be seeing even more improvements in the near future.

Overall, ÜberTwitter is my new favorite BlackBerry app, period. If you use a BlackBerry and you are a Twitter user, I can’t recommend this app enough. Give it a try – I think you’ll really enjoy it!

Are you an ÜberTwitter user? Have another favorite app that you think blows UT out of the water? Let me know in the comments!