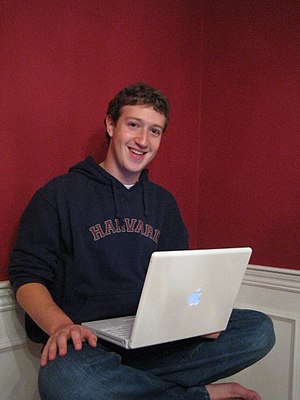 Despite falling off the wagon a bit in Week 2, I returned to Week 3 with new motivation, and didn’t skip a beat. Week 3 also featured a huge explosion of traffic, which happened early in the week, but had nothing to do with the content of that week.

I decided to use a photo of Mark Zuckerberg for this week’s wrapup, as Facebook was the theme for the crazy amount of visitor my blog received.

As I mentioned above, my traffic went through the roof in Week 3. And it was all due to a post from the week before…which got picked up on Reddit and blew the pants off any high visitor day I’d ever imagined. In this post, I talked about how that occured, as well as got nerdy on the subject of cloud computing and the changes I’d made to my blog to use Amazon S3 and CloudFront.

Tuesday – A short story with no ‘L’

I’ll admit it. This was a total “oh, crap…I have to post something today” post. I thought the smart move would be to use Plinky, since, well, that’s what it’s there for. The suggestion I got was to write a short story without using the letter “L”. I attempted that for this post. And not only was it dumb…I failed, and used an “L” after all.

A themeless set of links, which is actually how I imagined the Wanderings at first (before I decided they all needed to be themed). Posts like this tend to be somewhat throwaway, but can be really easy to write. I’m always glad when I’m having trouble coming up with a post, and it’s a Wednesday.

Thursday – How to rock Facebook but maintain some respectability

A friend of mine posted this link to Reddit, and I got some interesting traffic from that (nothing like Monday, but still a banner day for me), hence the giant numbers for this post.

Total Pageviews – 2,714 (actually, total since the rewrite; does not include the previous year’s pageviews of the original post)

This week saw a return to my Fussy Follow Friday posts. Since my Twitter buddy @jenniferalaine had been causing me no end of amusement lately, it seemed fitting to plaster her pretty face all over the front page of my blog for a day. Which was pretty cool, since it resulted in this:

Saturday – Henry in his towel

The last “cute kid” Saturday photopost was Joey, so it seemed right to feature Henry this time. He didn’t mind.

As mentioned before, everything blew up on Monday. Get ready to see some REALLY skewed numbers for this week. And I’m just going to compare to the same week period for the previous year, as my attempt to show “last week, plus a year ago” in the last recap was too hard to read. We’ll see a lot more slice-and-dice of numbers in the final recap post. Number in parentheses is from the same week in 2009

What are we learning? Well, one thing is that when you blow up on a site like Digg or Reddit, your bounce rate and PPV goes into the crapper. Mostly because you start to have REALLY targeted visitors. Those guys come in to see ONE post, but they tend to not stick around and see what else you have to say. Which, in a nutshell, means it’s not terribly helpful for building RETURN traffic.