What It’s Like To Be Married To Matt Stratton – By Carrie Stratton, His Wife

It’s Guest Post Week here at Good Old Rock…today’s post comes to us from my very own wife, Carrie. 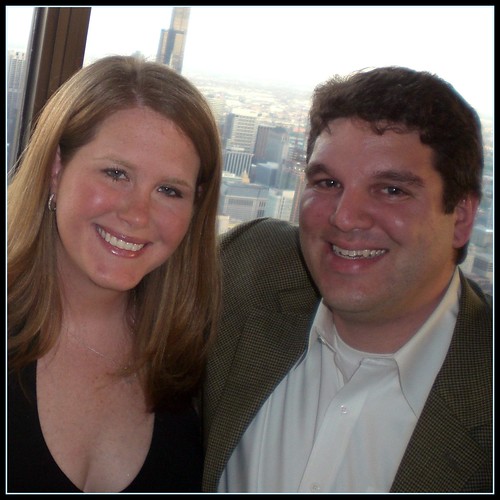 My mom always used to tell me that “eggheads rule the world.” Yes, that is a quote from Full House, which was my favorite show growing up. What she meant was that marrying a geek could often be a good thing. I never really thought I would marry a geek/dork/nerd. My older sister was a geek/dork/nerd and as far as I was concerned, we were polar opposites. When we were little I would beg her to play with me or ride bikes with me or go swimming with me. My parents had to yell at her to put her book down and go play with her sister.

I always thought I would marry someone who was just like me — outgoing and friendly and always wanting to do something fun. I never thought my husband would be someone who loves Science Fiction, Star Wars and Comic Books, or that he would be a total movie buff who loved to dissect movies. It’s funny how things work out though. A guy who has loads of internet friends, loves Battlestar Galactica and Futurama, has a secret love affair with his BlackBerry and often struggles in social situations met and fell in love with a bubbly ex-sorority girl who loves romantic comedies, reality TV and talking on the phone.

So, what’s it like to be married to my wonderful geek? Well, there is a lot of geek tv that goes on in our house. It is not uncommon for Matt to be watching Mythbusters downstairs while I am watching American Idol upstairs. It is also very common for me to go to bed at 10:00, wake up 3 hours later and see that the light in the office is still on and that Matt is still on the computer. I swear, if I didn’t tell him to go to bed every night, he would stay on the computer until 3 in the morning. Also, we love to go out for breakfast together and my wonderful husband often sports shirts that say something like “JOSS WHEDON IS MY MASTER NOW” or “I read your email.” He loves teh geeky shirts. He also loves using the word “teh”.

Being married to Matt also means lots of fun adventures. Unlike my sister, he is more than willing to get out and do fun things with me. We have lots of fun going camping together and both share a love of the outdoors. He also is a good sport when we go up to Michigan. He always goes swimming with me and endures my impatient attempts at teaching him to swim. He is also more than willing to do fun spur of the moment things like going to Great America or the Renaissance Faire.

On a more mushy note, being married to Matt means getting tons of support and love. He often is the stable one in our relationship and helps me remember to keep things in perspective. Also, for a guy, he is really good at communicating. Sometimes better than me, and I LOVE to talk. We are each other’s biggest cheerleaders and we try to do everything we can to bring out the best in each other. I can’t wait to see what he’s going to be like as a dad. I think he’ll be awesome.

Matt said that he would give me a backrub when I finished writing this post. I’m done.