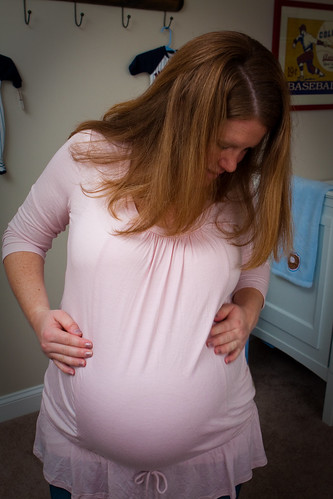 Carrie at 29 weeks. Which was last week, for the record.

(On a slightly related note, I have the hardest time in the world coming up with beginnings for blog posts. Often times I just start writing in the middle and tack the beginning on later. Clearly, that is not what I did this time.)

The boys will be here soon. As you may recall, they are officially due on Jan 29, 2010. However, what with being twins and all, the revised due date is Jan 15. Except…a few days ago, Carrie was talking to her doctor, and made a comment about only having two months to go. The doc looked her in the eye and said:

So we’re now thinking that the boys will be making an appearance sometime around New Years. Naturally, with my luck, they’ll be born at 12:01 AM on January 1st – just to totally screw us from an insurance and tax perspective. Yes, I’m cynical. Want to make something of it?

(This is the kind of blog post you get when I don’t have anything actually concrete to write about. Stream of consciousness is a weird hat for me to wear) 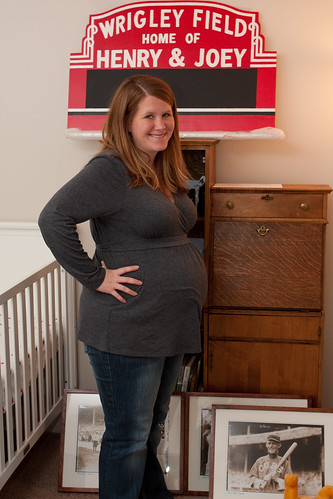 Everyone keeps asking us if we’re ready for the twins to arrive. I always have the same reply, which is “absolutely not.” Which is not true at all, but I think it’s funny. In all honesty, we’re pretty well prepared. Well, at least from a “stuff” perspective. We have all the various accoutrements that the new babies will need, and the boys’ room is almost finished (I just can’t bear to call it a “nursery” on my blog. It’s just not a butch enough word).

Naturally, their room is decorated in a vintage baseball theme. The crowning achievement is this custom-made Wrigley Field sign replica that we had commissioned. We also got some super-cool prints of photos of Cubs players from 1912 and 1913 that Lippy got from the Library of Congress.

(Carrie just snaked a sip of my soda and said “Sometimes Diet Coke tastes like liquid gold.” She’s not wrong.)

It’s kind of amusing to see how quickly Carrie got big “all of a sudden”. I feel like during the week that I was in Vegas, I came back and suddenly she actually truly looked pregnant. It’s okay for me to say things like “how big my wife is getting” because she says it too. And also because I am saying “big” and not “fat.” And also because she is so pretty and nice.

Ultimately, we’re both getting pretty charged up about being parents to these two little dudes. I’m not going to lie – we’re also both pretty much scared out of our minds. However, I’m counting on being so sleep deprived that I don’t notice that I’m scared. Also, I’m pretty sure that if I just Google “how to raise twins”, I’ll be okay.