I know, I know, it’s a Wednesday, which means I’m supposed to be posted Web Wanderings. But this was just too hilarious to NOT share.

Earlier today, ReadWriteWeb posted an article about Facebook Connect. Apparently, RWW has some amazing Google-fu, because within hours, that post became one of the top 5 results for Google searches for “facebook login”.

Why is this hilarious?

Yes. Here’s what these rocket scientists did:

2) They ended up clicking on the RWW link in the results (which makes little sense, as even though it was a top 5 hit, it was never #1)

4) They log in and think that the ReadWriteWeb site is “the new Facebook”. And get all pissed off.

I highly recommend reading all the comments yourself, but here’s a sampling of some of the angry users. They sure do hate this “New” Facebook…especially with all that darn red! 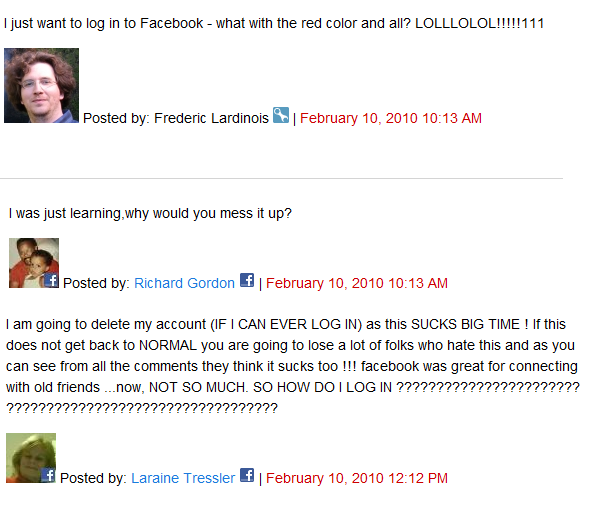 But never fear. Laraine Tressler won’t have to delete her Facebook after all. She’s figured out a solution!

For a while, some commentors thought that this was way too good to be true. There was no way that there could be THAT many dumb people…it had to be a 4chan prank or something. The RWW folks weighed in and reported that no, sadly, this WAS the reality.

I weep for the future of the internets.