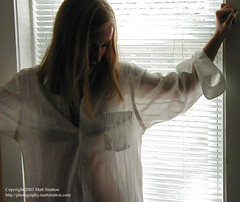 Like I mentioned earlier, Carrie and I are dogsitting for Sammy the cockapoo. He’s a cute little dog, but he can get a little attention-needy. He gets REALLY jealous when Scout is getting attention and he is not. Scout’s pretty good with other dogs, and poor Scout keeps getting attacked and nipped at by Sammy just for trying to play. We almost had a full-fledged dog fight in our bed last night – Sammy was laying in bed with us (we think that he sleeps on the bed at home, so he wanted to sleep with us), and Scout jumped up on the bed too. And Sammy snapped at him, and we had to pull them apart. Weird dogs.

On Saturday I videotaped Cherie’s Second City show. It was really well done, and I got some great footage. I also did a bunch of interview stuff with the players after the show at the bar, which I’ll be editing together this week. It was a good time to work with a good camera again (she had rented a DVX-100), and I might have even gotten some future work out of it (some dude at the bar saw me taping, and said he was looking for someone to do some freelance work for some industrial films, etc – I have to email him my reel).

Sunday was a lazy day. We had breakfast at the Golden Angel (mostly so that I could convince Carrie that it was actually not good, so now we won’t argue about that anymore), and then did some shopping. Listened to the Cubs game on the radio, and was very happy to hear them sweep the Redbirds in four games. Did some work on the Second City video last night, and that was about it.

Tomorrow morning, Carrie and Scout are leaving for Michigan, and they’ll be gone for a week. I wonder if I remember how to be a bachelor :)